The theme of this year’s heritage festival was to have been Wandsworth’s homes and housing.  Luckily, the work our contributors took in researching their walks, talks, exhibitions and open days will not go to waste, as this year’s events will be postponed until next year.  However, we thought it might be nice in the meantime to explore some of the items in our collections which tie in to this theme.

Many of the personal papers in our collection come to us via serendipity.  Perhaps they are found by new occupiers of a house on clearing out the attic, or by relatives when they have the sad task of clearing out a family home after a death.  Most of the time the would-be donor knew the person who created the papers – sometimes they were a close friend or relative.  Inevitably, these records are offered to us almost apologetically – with the caveat ‘you probably won’t be interested in these, but…’ and we just know  we are about to be offered something both ordinary and special!

Last year, we were offered two school jotters dating from 1926 which once belonged to Margaret White (1914-1979), who lived in Bolingbroke Road and went to Honeywell Road School.  One from housecraft classes, and one from cookery classes.  Margaret’s daughter wasn’t sure we’d be interested in these – but we were delighted to add them to our collection.  These two jotters tell us a great deal about the lives the girls in Margaret’s school were being prepared for.

Margaret was eleven years old when she wrote in these jotters.  Her very first lesson was in washing clothes – and there is a hint here that she got up to no good before even starting:

Washing and drying the clothes is broken down in Margaret’s jotter into six (seemingly straightforward) steps, which in reality would have taken several hours: 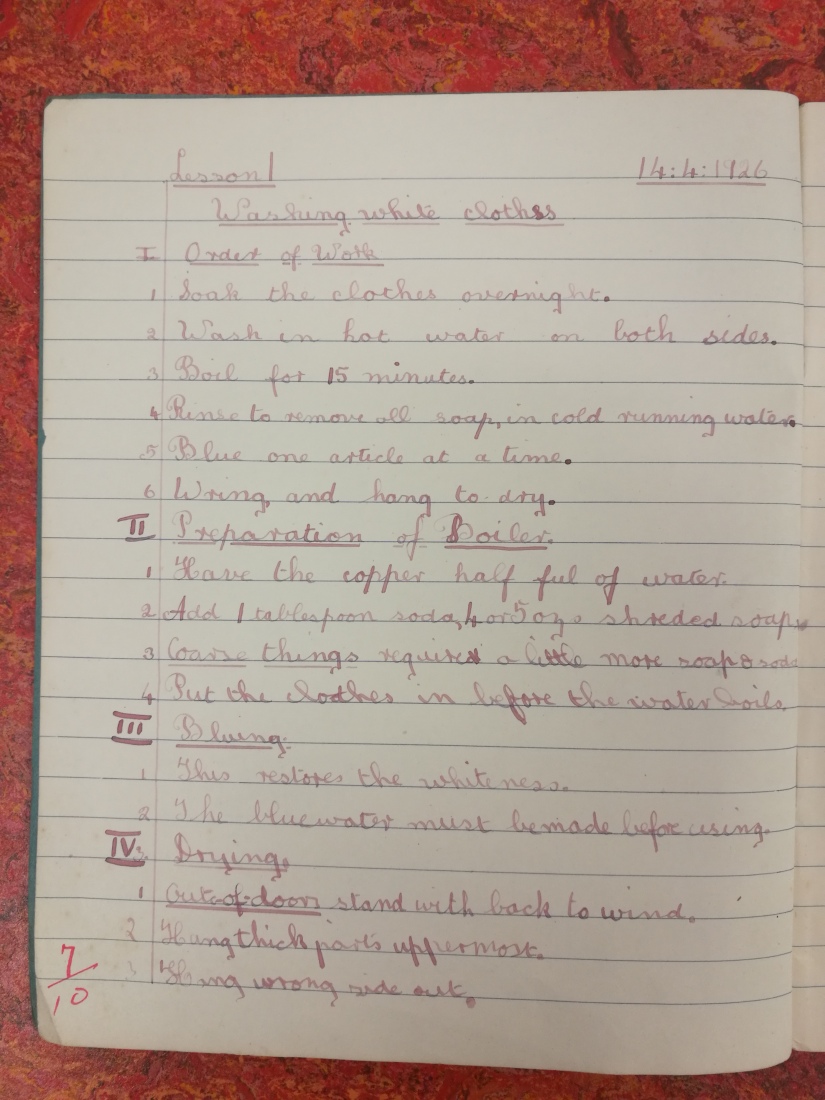 Quite apart from being horrified at the prospect of eleven year old girls sloshing boiling water around  and crushing their fingers in mangles, I was baffled as to what ‘bluing’ was.  Turns out that it is a process still used today, although far less common, and is largely for white fabrics.  Adding a touch of blue dye to the wash mitigated the yellowing and greying of the whites.  Further lessons documented in Margaret’s jotter include care and cleaning of glass, window cleaning, caring for leather boots and shoes, ironing, dusting, care and use of household brushes, cleaning cupboards, washing wood,  and cleaning utensils – all of which sound complicated and time consuming!

The likelihood was that Margaret and her classmates would have been putting the cleaning and washing skills they learned at school into practice at home – a reminder of this is the inclusion of infant care classes: 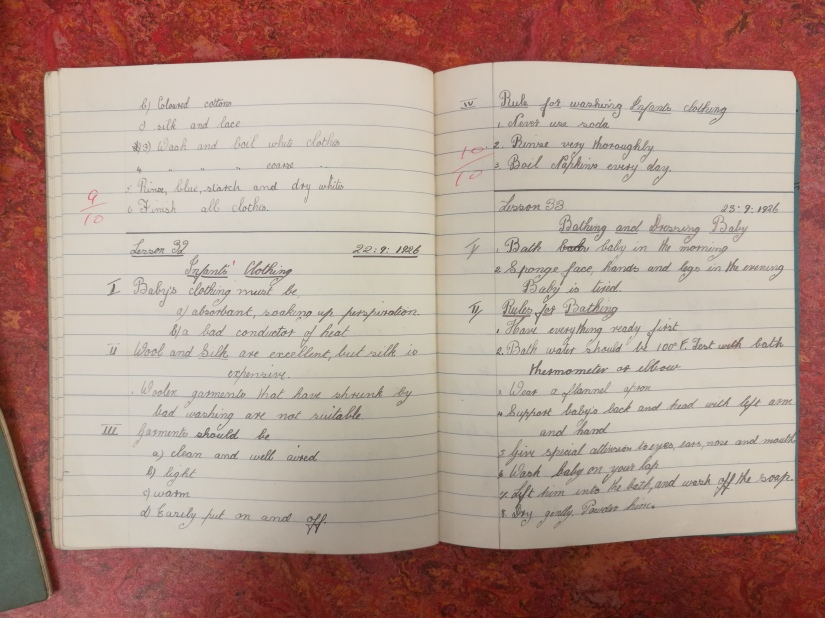 Apart from the [extensive] work involved in keeping the home clean and orderly, there is also cooking to be done.  Very little of which, it has to be said, sounds terribly appetising.  One of the first things Margaret attempts is ‘Baked Stuffed Fish’, which sounds as flavoursome at the title would suggest: 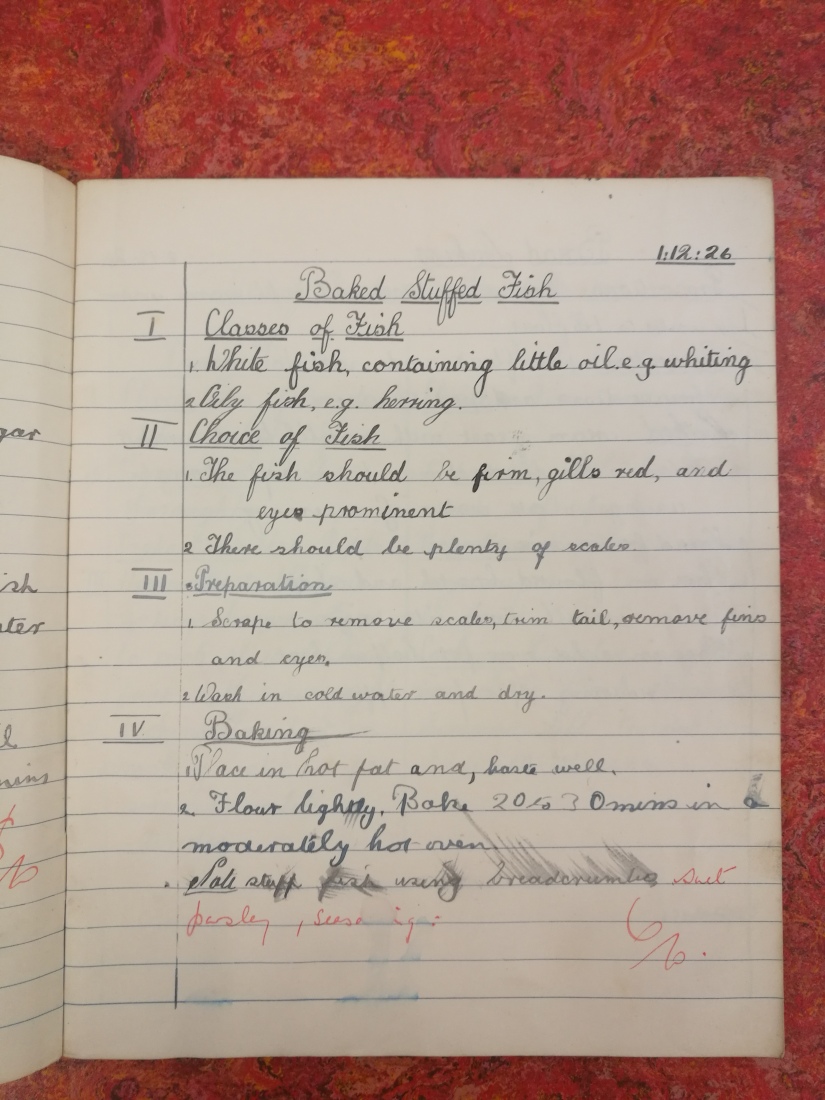 For her efforts, Margaret is awarded 6 out of 10 – and her teacher’s fading hand indicates that she should also have added parsley, suet, and seasoning [really not sure that the suet would have helped matters – don’t we use that mostly in bird feed these days?!].

I wish I could ask Margaret why she kept these jotters all these years.  It seems unlikely she would have referred back to them when cleaning her home as an adult, so perhaps her reasons were more sentimental.  Maybe she was fond of her teacher, despite the teacher’s tendency to be a harsh marker.  Or perhaps Margaret kept these jotters as a reminder of the expectations and limitations imposed upon women of her generation to share with her own daughter.  We’ll never know – but we’re grateful to give them a permanent home!

View all posts by ww1wandsworth